This is a sort of warmup – not the best, but considering the past several pages of sketches… Yeah, much better than those atrocities. I’ve been having a hell of a time drawing faces so a photo study was just what the doctor ordered.

I haven’t been feeling the greatest as of late, but I’m bearing with it I suppose. Treatment’s fun like that!

I’m gonna go sink into this couch until I reach oblivion, now. Have a good day, folks!

9/28/16: Too tired to face the world, so here’s a tiny drawing of how I feel. I’m going to go play on my DS now – Pokemon is remarkably non-draining. Unless I get a headache. Ohhhhhh Lordy I better not get a headache because of this pressure system.

It’s been while, hasn’t it? A lot has happened, but… I’m not sure how many words I have in me. Silence may be golden, especially with how tiring it is, however with everything that’s been going on perhaps that’s not the case.

END_OF_DOCUMENT_TOKEN_TO_BE_REPLACED 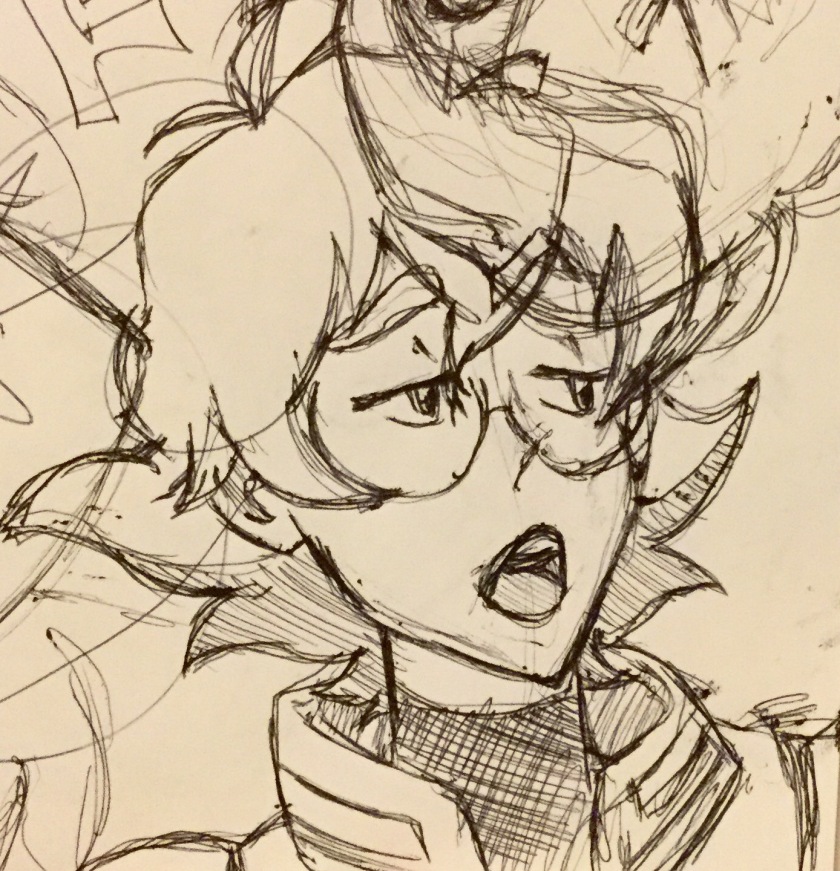 I always like to relax in the arms of a good animated show, be it anime or cartoons, and once in a while, I find one that I obsess over for a fair amount of time. It just so happens that the characters of “Voltron: Legendary Defenders” have stolen my heart – especially Pidge Gunderson – this time around. She’s relatable, has a personality that I adore, and I eagerly await how her character develops over the next coming season (and the one after that, I hope! I’d quite like to see this become a bit of a long running series).

END_OF_DOCUMENT_TOKEN_TO_BE_REPLACED

I have spent so much energy this week and I am just…. Amazed by how okay I am right now. My last post was about my fear that I was going to fall down the pit that I had resided in for so long before, but somehow I was able to recuperate and face this week’s craziness head on.

My sister and brother-in-law came over for her birthday (well- their birthdays, since my mom wanted to celebrate my sister’s husband’s birthday at the same time, too, since his birthday’s around the same time) Thursday night and, man, was I hyped for Friday.

So my sister likes Sufjan Stevens, her husband does too, and what do you know; my Dad and I do, as well! And when I say I like Sufjan, I mean he’s one of my all time favorite artists so when I heard that we’d gotten tickets for a concert at Wolftrap, I was in jubilation! And let me tell you, that concert lived up to the hype I built up in myself. It was so manic and awesome and the air conditions were terrible and I had the time of my life. It felt so short, even “Impossible Soul”, a 25 minute song (and one of my absolute favorites, by the way), felt like 5 minutes! It was all a blur really. One really colorful, spastic, crazy blur.

It wasn’t just a concert, it was a damn performance. Dancers, balloons, “is he wearing WINGS?!”, neon, a screen flashing so many colors, lights going wild, it was a lot to take in and I was already taken in by the music.

I slept pretty good that night.

The next day, Saturday, was full of sleeping in, “wait do I have time to do my IV before everyone comes?”, “Mom, I need to take a bath so we can wash my hair before they come!”, and my aunts and uncles coming over. Dad let me drink some of his beer and DAMN does it taste good. I’m not too sure about the types of beers yet but I think this was a pilsner? It’s a German style beer, his favorite kind, and as far as I know my favorite as well since all of the pilsners I’ve tasted I’ve thoroughly enjoyed.

IPAs, though, not so much! My uncle let me drink some of his and it was an interesting flavor I suppose, better than others I’ve had a sip of, but it’s not really my preference. Too much punch I think. I’m noticing that I’ve inherited a lot of similar tastes in beverages as Dad, heh.

Anyways, Saturday was fun but absolutely exhausting. I think I’ve said this before but I’ll say it again; being social is so tiring. It requires more cognitive energy than I’ve currently got plus I was sitting up for most of the night. Not exactly the best situation for a gal with P.O.T.S.! I was still tired from the night before, too, so I was pretty damn afraid that I may have pushed myself too much. It was pretty worth it, though, since in the past I was too sick to hang out with the family most of the time and it was really good to talk to everyone and seeing them be happy to see me made me really happy as well.

So here comes Sunday! Rise and shine, sleeping zombie, we’re going to brunch before sis and bro leave! Okay, well I didn’t have to go, but I really wanted to and I think it’s good that I did… except for the fact that it turns out gluten free french toast has too much egg for me. Not as bad as scrambled eggs or something – which, by the way, has sent me to the hospital multiple times – but still messed up my digestive system a bit. Luckily, the coffee and IV fluids cleared out my system really nicely so my symptoms didn’t get too bad.

After food, we sent off the two of them and off they went in that real nice rental car that I had the pleasure of riding in to and from the concert and not getting carsick in!

Here we are, a couple days later, still recuperating but with enough mental energy to type this out. Here I am wondering, “how in the hell did I do all of that and not fall off the damn miracle of a horse I’ve been riding for the past while?”.

I think my new doctor really knows how to take care of me, that’s probably why I’ve been able to be like this. I’m going to be seeing him this Friday and I guess we’ll figure out where to go from here.

God, I am dreading when he’s going to start me on antibiotics. I might feel pretty alright, but I’ve still got a myriad of little buggers in me that need to be taken care of, especially the babesia and Lyme, so… Well, I’ll cross that bridge when I come to it.

I’ll be sketching a bit before getting back to the colored pieces for my requesters to get back on board with things, so keep an eye out for that. Maybe I’ll even do one of those WordPress prompts at some point, but we’ll see!

Good things don’t last forever, and I’ve been dreading when my health falls apart again. I’m glad I had enough energy to do things for a while.

END_OF_DOCUMENT_TOKEN_TO_BE_REPLACED 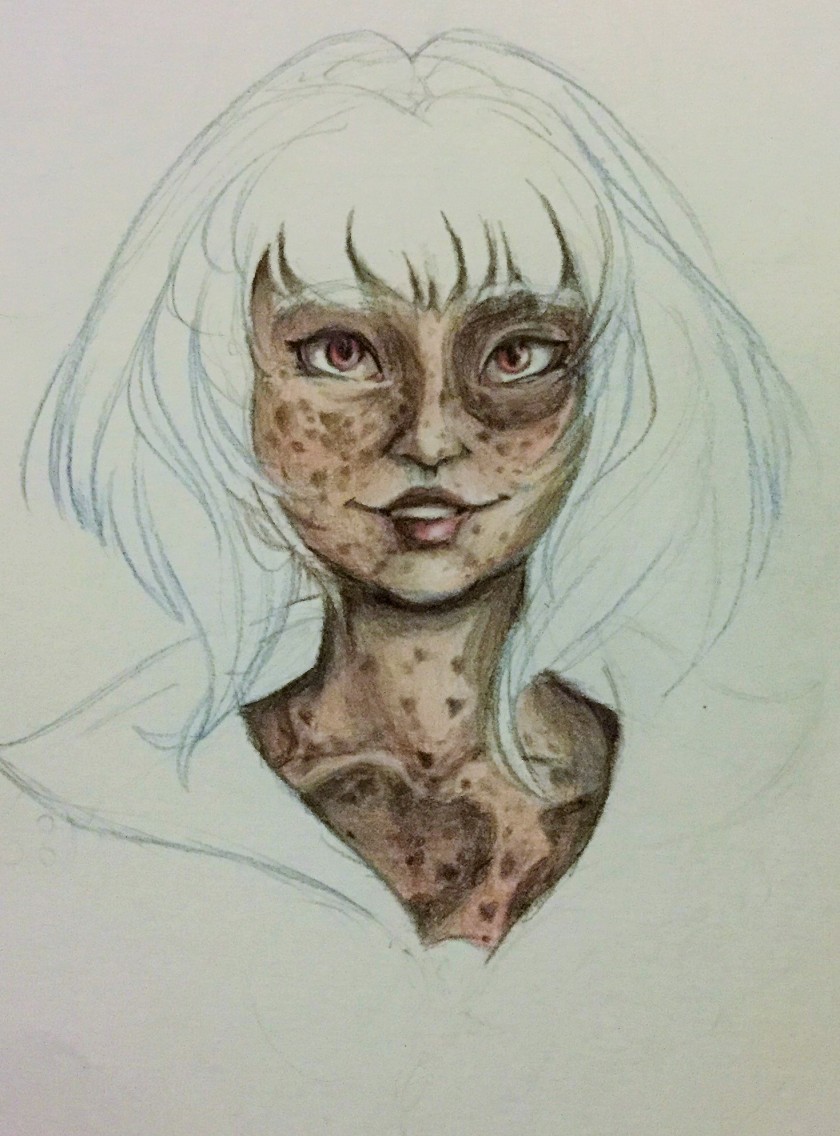 In which I get heavy handed with shading. I’m still liking how it’s going, but I need to learn to not overwork the piece. Well, it’ll probably look much better once the whole work gets filled in as long as I can keep a rhythm going! A good rhythm brings out a good balance in my experience (although I don’t have very much experience with colored pencils).

There’s some work I still need to sketch in, but what I’m planning on sketching takes some referencing while the coloring was intuitive which I was better suited for today.

Sorry for the poor image quality! My camera is out of battery so I took this with my tablet.

…. I just realized I forgot to scan in the other drawings, agh.

A long ways to go! Her skin’s not finished, but I didn’t have all of the colors I needed and didn’t have the energy to go through the colored pencil box. I also needed to scan in the other two drawings but the same reason kept me from that as well (this was taken with my camera). I always underestimate how much getting ready for the day takes out of me, worse so now that my good days have been waning a bit.

Slow, but steady progress at least.

Has felt so incredibly long.

I have been having more good days for the past month than I’ve had in 3 years (perhaps a hyperbole, but that’s the best way for me to convey what it’s been like ’round here) and yet it feels so much harder to keep up with life. I’m actually accomplishing things! Yet, I feel like I haven’t done enough.

END_OF_DOCUMENT_TOKEN_TO_BE_REPLACED

1: The drawing that never got scanned in! The request actually said “lowkey sparkly tunic” but at the time I read “tunic” as “cape” for some reason ^^;

2: Sketches I did to warm up and get her character right and some random dramatic figure.

3: Base sketch for the colored piece (on bristol paper). I have some details to work out, but I like where it’s going!